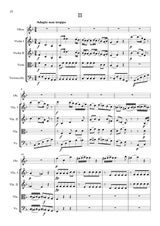 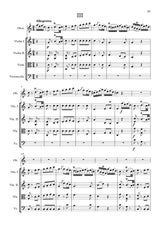 Wolfgang Amadeus Mozart (1756-1791) composed a single Oboe Concerto in 1777 for Giuseppe Ferlendis, the oboist in the Salzburg Court Orchestra. The work displays Mozart's trademark elegance, wit and lyrical inspiration. Mozart adapted the piece for flute in which it became widely known, and the score of the oboe original was lost until a set of parts was discovered in the early 20th century. This arrangement is oboe and string quartet, with the optional addition of a double bass. Mozart arranged a number of his piano concertos in this format to allow the pieces to be performed in a domestic setting.