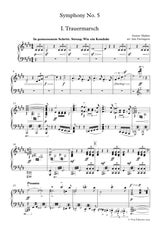 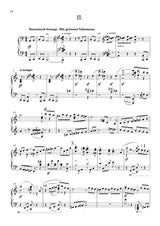 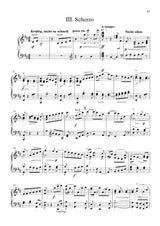 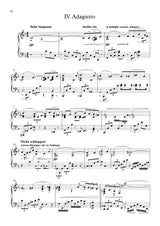 Gustav Mahler (1860-1911) composed his 5th Symphony in 1901-2 while he was music director at the Vienna State Opera. It was written at Mahler's composing hut in Maiernigg near the Wörthersee, and he conducted the premiere in 1904 with the Gürzenich Orchestra in Cologne. The work is often directly inspired by events in Mahler's life. He had suffered a near-fatal haemorrhage in February 1901, which likely inspired the opening funeral march and the following turbulent movement. His recovery is reflected in the symphony's journey as a whole, from tragedy to triumph. Mahler was also becoming fascinated with counterpoint and the music of Bach, which is reflected in the part-writing and use of fugal devices, especially in the Finale. The fourth movement Adagietto is scored for strings and harp only, and has become one of Mahler's most well-known and popular works. This arrangement by Iain Farrington for piano solo is in a full, Romantic style, whilst maintaining the beauty and delicacy of the score in a clear, playable arrangement.